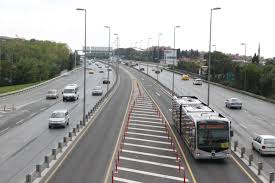 solutions here. There is an existing 143 km long railway line in total (metro and trams

combined) and it is growing; however a BRT route was a quicker solution to meet the needs

and we think our model proved to be successful. Before Metrobüs it took three hours for the

investment cost was provided by the Istanbul Metropolitan Municipality.

congestion. During peak hours the average speed of rubber wheel vehicles dropped to as

much as 8-10 km/h before this system. Another objective was to decrease the use of

automobiles by providing a faster and more logical alternative. With this project we aimed to increase the efficiency of management and energy. Decreasing the emission of greenhouse gases at local level was also a goal.

Before Metrobus system was applied the main objective was to attract more passengers and Metrobus succeeded in that; actually it attracted more passengers than expected and the system is now pushing its limits (it carries around 800,000 passengers in a day and the limit is 870,000). Another aim was to reduce the use of automobiles in order to decrease the traffic congestion and according to the studies carried out some 80,000 vehicles (automobiles, buses and minibuses combined) have been withdrawn from the traffic thanks to Metrobus. We also met with our objectives towards environment and efficiency to a great extent. Daily fuel savings amount to 242. In this regard, we are able to say that the project delivered more than expected at some areas within the scope of its goals and as for the remaining goals we can say that the outcome is near the expectations.

There is an improvement in the life quality of passengers because of the savings in time. Integration between modes results in an additional time saving. Before the Metrobus it took 3 hours to travel between Avcılar and Sogutlucesme, now it is 83 minutes and as the buses operate with a high frequency average waiting time at the bus stops is reduced. There is also an increase in the safety of passengers as Metrobus system has its own dedicated line and there are cameras at each bus, station and on the route.

These monitoring activities also support emergency action plans and the Metrobus route can be used as an emergency line in the event of a natural disaster. During peak hours average headway between 2 metrobuses is 15 seconds and during non-peak hours it is 45-60 seconds. We can also mention one of our passengers words here: “Before Metrobus those who were in automobiles looked at people inside the buses and thought they are 2nd class, now we overtake them swiftly in a congested traffic”. Furthermore, according to a 2010 IETT survey, 70.8 percent of BRT riders in Istanbul choose Metrobüs because it is fast and unaffected by traffic congestion.

Metrobus has increased the efficiency in public transport. As the buses on the dedicated route provide a much faster service and have a bigger capacity, there is a considerable increase in efficiency. This increase in efficiency means a decrease in costs on IETT’s behalf and it enhances the institutional sustainability. Generally, the assumption among the public transport authorities is public transport’s not being a profitable business; however Metrobus system is different within this scope. Half of IETT’s fare revenues come from the Metrobus system and this revenue also help us compensate for the costs originating from the regular bus routes. Metrobus system operates with 1500 employees, most them being drivers, cleaning, security and maintenance personel. So, we can say that Metrobus system provided an employment opportunity for that many people.

All of our buses on the BRT – Metrobus route (also buses at regular routes) have a computer inside for the driver. This computer has a LCD screen, GPS and GPRS systems. With the GPS system our personnel at the control center track buses on map in real time and with the GPRS system they can gather data or send data to the driver. For example if the driver is going faster than the speed limit our personnel at the control center can send a warning to the driver. Also there are cameras in the bus and at the bus stops. Cameras at the bus stops have the zooming and rotating features and they can be controlled by the personnel

The Differences Between İstanbul BRT And Other BRT Systems

Metrobus – BRT system is not an exclusive project carried out only in Turkey. There are other BRT systems all around the world. However, Istanbul BRT has some prominent features when compared to other systems. For example, it has the highest commercial speed among the BRT systems. It has a dedicated route which does not interlace with the general traffic and it is also an advantage. Its IT infrastructure is also remarkable and all of these features draw attention from all over the world. We had many visitors who wanted to see the system and many of them took some aspects of the Istanbul – BRT as a model for their own projects in their countries. IETT provided consultancy and know-how to Lahore Transport Company – Pakistan in the construction and operation of Lahore Metrobus system and they took Istanbul BRT as a model. The system which was applied in Lahore is quite similar to Istanbul – BRT. Currently, Metrobüs is the most used BRT system in Europe and one of the fastest, with an operating speed of 35 km/h.

Public transport became a faster solution with its own dedicated line and no traffic lights. Passengers using this route now save approximately 97 minutes a day and according to the studies carried out around 28.000 people chose our system to get to work, school or home by leaving their cars.

Before Metrobus some 1316 minibuses and 443 buses carried 309,533 passengers on a daily basis. Now, Metrobus system itself carries around 800,000 passengers in a day.

Aside from automobiles there is also a reduction in public transport vehicles and the total number is approximately 80,000. Daily fuel savings amount to 780,000 TL / 400,000 USD in a day and for the passengers there is also a saving in fares as a result of the integration between modes and the transfers made. 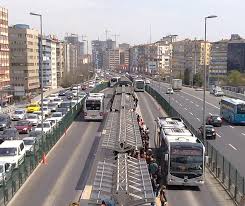 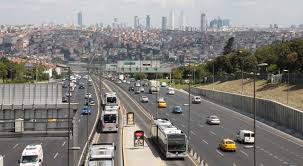