IFEMA hosted the tests to find the Minibus of the Year

On 19, 20 and 21 April, the jury made up of specialists from 19 specialised international publishers conducted tests on seven candidate vehicles

The models selected were: the Spica from Car-Bus.net, the Nora from Ferqui, the Next L7 from Indcar, in-vip from Integralia, the Daily Tourys from Iveco, the MD-7 from Temsa and the Voyager GT from Unvi

between 19 and 21 April, IFEMA hosted the tests to determine the winning vehicle in the Minibus of the Year award. The jury from the prestigious European International Bus & Coach of the Year Awards offers this prize in order to fill a hole in the categories that are judged in Europe as, until now, there was not a category that included minibuses, microbuses and midibuses for passenger transport.

The Minibus Euro Test was organised by the specialist magazine Autobuses & Autocares, and involved Miguel Saez, the publication’s director and Spanish member of the international jury. The tests were conducted in collaboration with the FIAA International Bus and Coach Show, which is organised by IFEMA and will be held between 23 and 26 May at the Feria de Madrid Exhibition Centre

The winning vehicle will be announced at the opening ceremony of FIAA, which will be attended by a large contingent from the international press, backed by the powerful group of specialist media partners that organises the fair.

The aim of the Minibus of the Year award is to boost the visibility and promotion of this important segment of the bus sector, which has a high growth potential. The ability of these types of vehicle to adapt to the needs of urban transport and tourism, as well as the cost savings they represent, make them one of the passenger transport formulas of the future. This is also supported by the latest sales figures for minibuses which, in the 2016 financial year, grew by 65%.

The models selected to participate in this first award and that were subjected to numerous tests were: the Spica form Car-Bus.net, the Nora from Ferqui, the Next L7 from Indcar, in-vip from Integralia, the Daily Tourys from Iveco, the MD-7 from Temsa and the Voyager GT from Unvi.   They all comply with the requested requirements: a minimum of 9 passenger seats plus the driver’s sea,; a maximum length of 9.9 metres and a market presence of a maximum of two years.

During the Minibus Euro Test, the jury members checked the performance of each vehicle under real road conditions on a route designed with several different features: uphill and downhill sections, motorway, narrow roads, and so on. 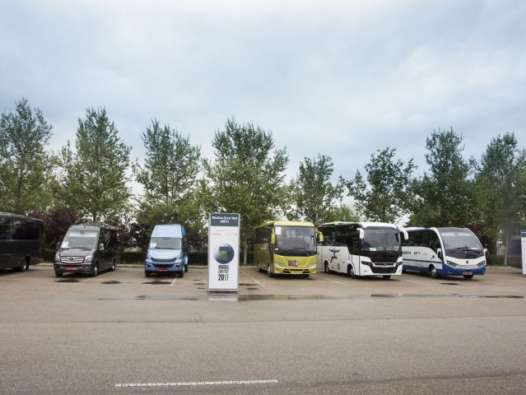 Atak Electric from Karsan to Belgium  The commercial vehicle manufacturer Karsan, which is the eco-friendly…

A first in the Netherlands: 39 of Ebusco’s fully-composite, electric buses will operate in the…

The first electric buses from Solaris in France