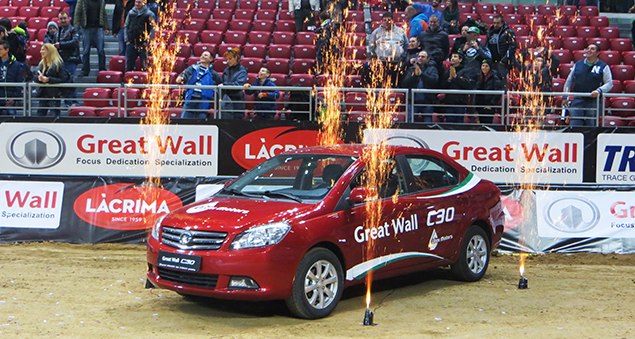 About the Great Wall Brand

Great Wall Motors is the biggest privately owned automobile manufacturer in China whose products are sold in more than 100 countries all over the world. Great Wall Motors is the first private automobile company traded on the Hong Kong stock exchange. The manufacturer has more than 30 subsidiaries and more than 38,000 employees worldwide. In the summer of 2011, in Tiandjin, China, the company opened a completely new and modern plant with a maximum capacity for 1,000,000 motor vehicles annually. The company also has its own production of engines and transmissions.

In the last ten years, thanks to its corporate culture and management, the company was successful in achieving significant growth and positive business results which have placed it among the leading vehicle brands in China. In the process of time, the young high-technology company Great Wall Motors has been a awarded a number of prizes from leading local and global institutions.

The product strategy of the company is guided by thee basic principles: higher levels of equipment, better performance, and more techologies. By 2015, GWM intends to reach a manufacturing capacity of 2,000,000 vehicles annually, and by 2020, to become the No: 1 ranking company worldwide in terms of sales of SUV’s and pick-ups.

For the next several years, the ambition of Great Wall Motors is to supply a diverse range of vehicle models to the European Community market, offering the end users one of the best price-product ratios, following the latest automobile trends in the world.

Great Wall Motors (GWM) is the biggest privately owned automaker in China. It is the No: 1 Chinese brand in terms of exports of motor vehicles, and the No: 6 in terms of sales volume on the Chinese market in 2012, where a total of 19,3 million vehicles were sold during that year. The company sells its Great Wall vehicles in over 130 countries worldwide, including countries of the European Union. GWM are the first and only independent Chinese automobile company with type approval of its products for selling in the EU, and it is the only Chinese brand under which motor vehicles are manufactured in a plant in Europe — the

AUTOMOTOR CORPORATION PLC, CITROËN received the “Design Star in “Design Awards”. The awards were presented at…