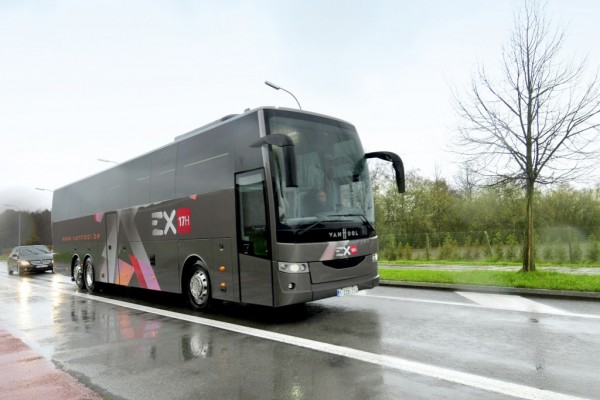 The British bus journal Bus & Coach Buyer recently announced that Van Hool plans Macedonian expansion after a good year. The Belgian bus and coach manufacturer stresses that despite these developments, the Van Hool headquarters along with its decision making and innovation functions will remain in Koningshooikt, as will the production of specialised industrial vehicles and buses and coaches with high levels of added value such as the Astromega, Altano and the Exqui.City. It anticipates remaining the fourth largest industrial employer in Belgium.

For 2016, it believes turnover will be somewhat lower for the bus and coach unit it nevertheless expects improving results. Continued efforts are to be made on optimising the use of working capital and cost saving.

Further growth will be based upon continued internationalisation which will require additional production facilities. The plant at Skopje in Macedonia, where the CX45 and CX35 for the US market and the EX-range for Europe are produced, is to be doubled in size over the next three years at a cost of €15m (£12.65m). This will take annual production capacity to 900 units.

Solaris with Innovation Award in the category “Electric bus: Intercity“ On 26 April, at a festive…

Turkish bus and coach manufacturer BMC, will be present at the 10th edition of Busworld in…
Previous Post