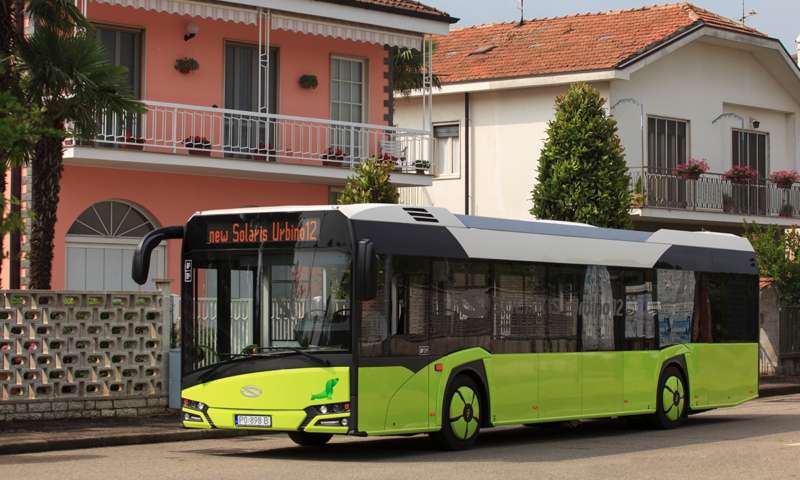 (Goteborg, 19th October 2016) At Persontrafik 2016 in Goteborg, Solaris shows three vehicles. The CNG version of the new Urbino, and the 15-metre Urbino low entry powered with CNG will be exhibited at manufacturer’s stand during the exhibition. The third bus displayed is the new Solaris Urbino electric. The vehicle was named best city bus of 2017 and handed The Bus of the Year award during the press conference at IAA in Hanover. The new generation cutting-edge battery-buses had its premiere at Busworld exhibition in Kortrijk in 2015, and have already been ordered by several operators from Germany, Poland and Finland.

The first edition of the 12-metre Urbino CNG uses the advantages of the new-generation Solaris, such as its light frame and state-of-the-art driveline, as well as the commodious and comfortable passenger space.

The drive unit of the new Urbino 12 CNG is a Cummins ISLG engine producing 320 horsepower and meeting the Euro6 norm, and in the presented vehicle it is coupled with a VOITH Diwa6 gearbox. What is new about this model is the installation of a CNG cylinder. Five composite tanks are fitted alongside rather than crosswise on the roof, as had been the case in the former Urbino version. The new gas tank construction technology allows to reduce the weight by up to 80 kilograms depending on the configuration. What is more, thanks to locating it alongside the bus, it was possible to reduce the number of cylinder valves. The model presented at the fair boasts gas tanks of a volume of 1575 l. The producer offers also bigger cylinders, containing 1875 litres, or smaller, 1260-litre ones. Thanks to this option the bus can be tailor-made to the needs of carriers.

The new gas-fuelled Solaris of the new generation has a gas filler valve in the same spot as the diesel engine counterpart has its filling unit. That is why neither the seat layout, nor the interior of the gas-fuelled bus, nor even the layout of the driver’s compartment have been changed compared to diesel buses. Just like in other models of the new generation Solaris, the gas bus stands out thanks to its spacious and bright interior, where modern solutions already known from other Solaris vehicles have been used, such as LED lighting, efficient air-conditioning or USB chargers, which make the journey by this bus extremely comfortable. The bus contains 33 seats, 16 of which are accessible from the low floor.

The battery-powered Solaris Urbino which has been named best city bus of the year 2017 is also presented in Goteborg. The innovative electric bus had its world premiere at Busworld exhibition in 2015. The vehicle presented at Persontrafik 2016 is equipped with Solaris high energy batteries which deliver 240 kWh and comply with the most rigorous safety standards. The set has been divided into six separate packs of 40 kWh each. 160 kWh are located at the rear of the vehicle, while the rest is mounted on the roof, over the first axle. The new Urbino 12 electric has been fitted with an innovative pantograph charging system. 450 kW power allows for a quick recharge of the batteries on route. A traditional plug-in connection has also been provided and can be used for overnight charging at the depot.

Emission-free and clean, the electric bus in Solaris’s new design constitutes the most innovative item in the Solaris portfolio. The benefits of the new Solaris construction such as light and rigid bodyframe, skin- on-skin panels assembly as well as ergonomic, spacious interior in combination with an exquisitely quiet and clean motor result in this extraordinary vehicle.

The new 12-metre Urbino electric is fitted with the electric drive axle with axle-mounted motors, 125 kW maximum power each. This concept frees up space for passengers and significantly reduces the weight of the vehicle. Thanks to the high-class electric equipment and the electric axle the drive is exceptionally quiet, smooth and devoid of vibrations. This is exactly why Solaris’s battery -powered bus is a perfect solution in the modern city environment, providing a positive travel experience even with large numbers of standing passengers on board.

It has to be stressed at this point that all models of the ever-expanding new Urbino family are based on the same construction, and use the standardised components and systems are arranged in a similar manner in the bus. The manufacturer has applied identical side panels in each model, and also the roof panels are the same, even though differing equipment is installed on the roofs of the vehicles. The standardisation of the new Urbino series guarantees a faster and cheaper maintenance of vehicles, provided the carrier’s fleet consists of various types of vehicles of the Polish manufacturer.

The portfolio of the new-generation Solaris buses includes the so-far most popular models: the 12-meter and the 18-meter diesel engine buses, as well as the standard-length electric bus and the low-entry Urbino 12 LE. Soon, we may also expect the gas-fuelled Urbino 18 CNG and the electric Urbino 18 to be presented. Solaris has been gradually replacing the third-generation buses with the new Urbinos since 2014, when the world premiere of the first buses from the newly-designed family took place.

With its Urbino-family low entry buses, Solaris Bus & Coach offers a vehicle design tailored to the requirements of high-quality interurban bus operation. The standard-length Solaris Urbino 12 LE is joined by the Solaris Alpino 8.9 LE midibus and the maximum-length Solaris Urbino 15 LE. The low entry design combines the advantages of a low-floor front section with those of a conventional rear. It offers step-free access for mobility-impaired passengers, while all seats in the rear section are forward-facing and offer excellent comfort. The raised floor level behind the second door allows conventional chassis components to be used. Solaris low entry buses are designed for interurban operation and offer excellent economic options due to their versatility.

The Solaris Urbino 15 LE offers a high capacity option at 15 metres length. This model has been particularly successful on the Swedish and Norwegian markets, where Solaris delivered over 400 vehicles equipped with biogas and HVO biofuel engines. 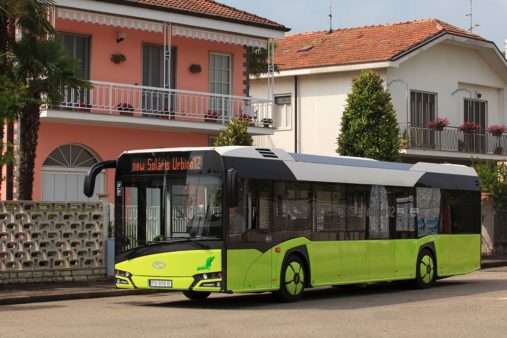 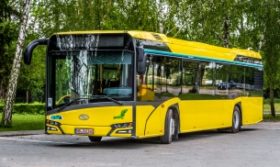 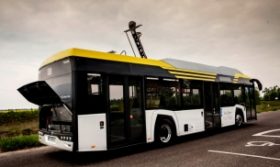 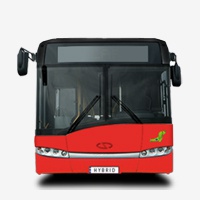 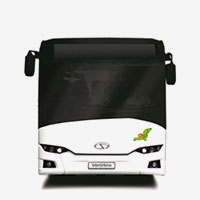 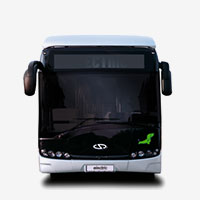 Karsan Flexes in Berlin with its Electric Buses!  The zero-emission, high-range electric vehicles from Karsan, helping…