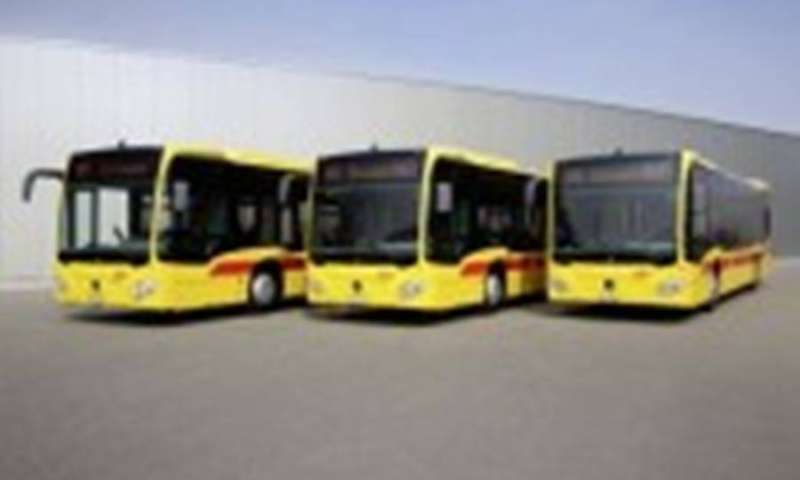 Daimler Buses is developing two electric versions of the Citaro: the battery-electric Citaro E-Cell and the fuel cell electric F-Cell. They should continu the success of the Mercedes-Benz Citaro, which is the world’s best-selling city bus: almost 45,000 Citaro models are on the roads in Europe’s major cities and beyond. At present the Citaro is powered by a clean and highly economical diesel engine meeting the stringent Euro VI emissions standard.
This is now being joined by another: the UITP Congress will see the world premiere of a new natural gas engine for the city bus. It is significantly quieter than the already quiet diesel engines. Moreover, its CO2 emissions are more than 20 percent lower compared with the diesel equivalent.

Daimler is also looking into the near future: before the end of the decade, the Citaro E-Cell with battery-electric drive and the Citaro F-Cell with fuel cell drive will enter series production. The forecast: in 2030, 70 percent of all newly acquired Citaros will be locally emission-free with electric drive.
The Citaro E-Cell and F-Cell will be based on a modular e-platform. This allows tailor-made electric mobility for individual cities and even for each bus route: the battery capacity and charging technology are suited to the individual requirements.
At the same time Daimler is concertedly driving the further development of the diesel engine: new fuel-saving technologies such as a compact hybrid are set to achieve a further reduction in fuel consumption and therefore CO2 emissions by around ten percent.

Amsterdam Public transport will be completely emission-free within 10 years

Hyundai Motors starts production of the all-new H350 in Europe