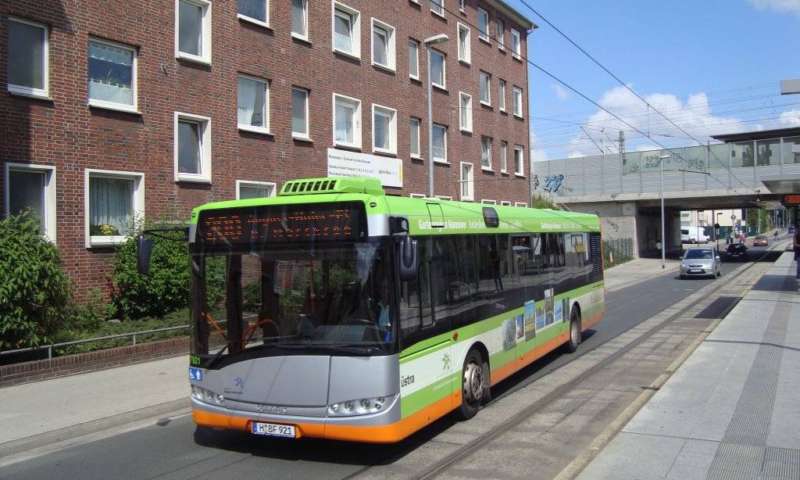 Solaris has finished 2015 with the highest turnover of its 20-year history which amounts to as much as 1.7 billion zloty (403 million euros). Over the course of the past twelve months the company maintained its leadership in the Polish domestic market for low-floor city buses. The manufacturer of modern public transport vehicles also confirmed its position as a leading brand in the design and construction of electric buses.

In the 2015 Solaris was ranked as the first player in the Polish city bus market for the thirteenth consecutive year. 333 buses in this segment of the total 701 purchased by local transport companies were Solaris branded. This represents a 47.5% market share for the company. This is also 30 percentage points higher compared with the results achieved by the second-placed competitor.

City bus sales in Poland in 2015, in number of vehicles

The number of buses sold abroad reached 946 Solaris, which constitutes 74% of the total number of vehicles sold last year. With the delivery of 158 buses and trolleybuses, the Czech Republic has grown to the largest sales market for Solaris besides Poland. For the Czech subsidiary it is a new sales record. Traditionally Germany, Italy, Latvia and Romania had a large share of last year’s sales.

Solaris bus and trolleybus sales in 2015 by country, in number of vehicles

Total sales for 2015 amounted to 1279 buses and trolleybuses as well as 17 trams. Therefore it is the third-best vehicle sales in the 20-year history of Solaris. During this time over 14,000 vehicles left the plant in Bolechowo traveling to 30 countries worldwide.

The biggest challenge in the past year was undoubtedly entering the new generation of the Urbino family into series production. The first units of the latest version of the Solaris city bus were delivered to customers in June. Until now, almost 300 units of the new Urbino in 12- and 18-metre versions have been supplied to nine European countries. The new generation Solaris buses were purchased by transport operators from Austria, Germany, Finland, France, Italy, Norway, Poland, Spain and Switzerland. Besides the aforementioned diesel models of the low-floor new Urbino, in autumn 2015, the company enriched its product range with an electric bus and low-entry vehicle in the new design.

Solaris battery-powered buses In 2015, Solaris proved again its high level of expertise in the construction of battery buses and maintained its market position as a leader in the development and promotion of this increasingly used green technology. Last year alone, Solaris handed 25 electrically-powered vehicles to customers from Spain, Germany and Poland. Interestingly, the buses were supplied with different battery types and charging systems: from the popular plug-in connection over the pantograph and induction charging to the solution with a fuel cell range extender. Among the cities where lines are operated with battery buses from Solaris there are now such metropolises as Barcelona, Berlin and Warsaw which joined the ranks last year. In Poland there are also Jaworzno, Ostrołęka, Inowrocław and Krakow to enjoy Solaris electric buses. In addition, further contracts will be completed in the following year. Solaris is to deliver battery-powered vehicles among others to Hannover, Hamburg and Tampere (Finland). Also Paris decided to turn to long-term tests of electric buses, including the new Urbino 12 electric. This year the Paris City Transport operator RATP wants to take the first strategic decisions regarding these eco-friendly vehicles.

The innovative solutions of Solaris found recognition in many European contests. The new Urbino 12 electric has been chosen the Bus of the Year in Spain by the industry magazine “Viajeros”. The new Solaris design was also awarded the prestigious iF Design Award 2015 and received the UITP Award as a project which creates a great value for the public transport development.

In 2015, Solaris completed the deliveries of two major tram contracts. The first was to supply a total of 18 Tramino to Braunschweig. The other order came from the Polish city of Olsztyn and is closely linked to the reintroduction of trams in the capital of Warmia and Mazury after fifty years break. Since December 2015, the inhabitants of this city can travel with the fifteen modern and quiet Tramino Olsztyn.
At the end of the year, the company started the implementation of two further orders in the urban rail vehicles field. The first project concerns the construction of trams for Leipzig. Leipzig City Transport have signed a contract for the supply of a total of 41 vehicles (including an option of the agreement). The delivery of the first tram is scheduled for the fourth quarter of 2016. As a subcontractor Solaris has also started production of 110 car bodies for rail vehicles TW 3000 which will run in Hannover.

The tram Tramino Braunschweig was successfully appreciated in the Red Dot Award in 2015. The rail vehicle of Solaris was awarded for high design quality.

“That was a very good year for our company, which achieved record turnover result and the third-best sales in its history. These figures are the more satisfying that last year we carried out a few very ambitious projects of decisive importance for the development of our company. It was mainly the expansion of our production plant in Bolechowo resulting in optimization of production. Major changes in that regard also applied to the warehouse and office areas. We have focused on improving processes in our company, in particular those relating to our after-sales. Finally, we have entered the new generation of Urbino into the serial production. These activities are showing positive results already. The best proof is our order book for 2016, which is greater by 150 units than the same time last year,” says Dr. Andreas Strecker, CEO of Solaris.

“In 2016 we plan to introduce more new products of the new generation. This will include the new Trollino and the new Urbino powered by CNG. Besides that, we want to offer our customers new solutions in the field of hybrid buses. It will certainly be a year of a dynamic growth in battery buses sales in Europe. We will do our best to play a key role in this segment. We also work on intensifying our sales activities outside the continent. I believe that I will be able to describe more details regarding our foreign expansion in the coming months,” announces Dr. Strecker.

Solaris is leader on the Polish electric bus market

Solaris will supply 29 electric buses to Offenbach am Main. This is the second biggest order from Germany…
Previous Post

Busworld Turkey is preparing for a successful 6th edition in Istanbul