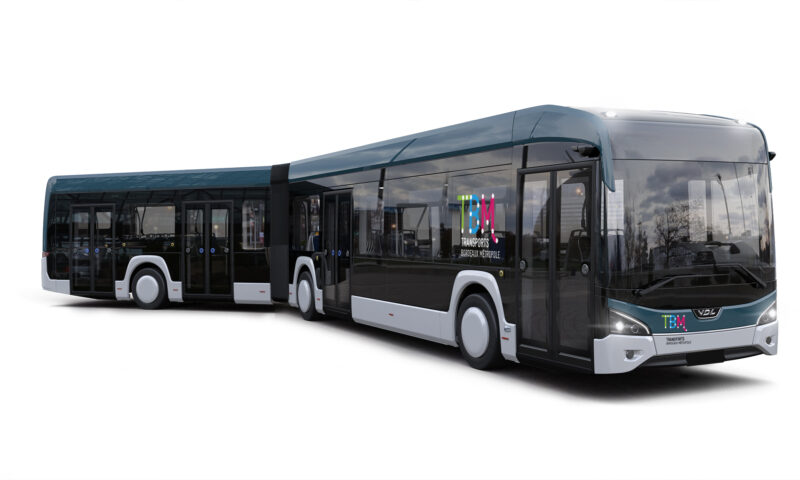 VDL Bus & Coach’s first e-mobility project in France will be rolled out from the first quarter of 2024. In the conurbation of Bordeaux, where 800,000 people live, 36 new generation Citeas will be in service for a new electric Bus Rapid Transit (BRT) line with focus on commuter traffic. The articulated buses of the type Citea LF-181 are based entirely on an electric drive train and has trend-setting features.

“We are extremely proud that VDL, after a long and thorough selection process, has been selected by one of the most important metropoles in France to realize such a demanding bus line”, says Marcel Jacobs, Commercial Director of VDL Bus & Coach. “A great result for our VDL Bus & Coach sales organisation in France, where we intend to take even more important steps in the field of public transport in the near future. This is a true recognition of our qualities as a European frontrunner in e-mobility. The principles of the new Citea bus concept, which offers solutions without any compromise, fit seamlessly with the sustainable ambitions of the metropole of Bordeaux.”

Work has already begun in Bordeaux to implement the bus line that will be served by the new generation Citeas from the year 2024. It is a completely new operation, replacing two existing regular bus lines. Bordeaux aims to provide a reliable and high-quality public transport service for urban commuters from the commune of Saint-Aubin de Médoc, to the Saint-Jean Central railway station in the city’s historic centre. Dedicated bus lanes with traffic light prioritization are foreseen along the 21 kilometre long line.

The metropole of Bordeaux has a population of 800,000 spread over its 28 municipalities, making it one of the largest metropoles in France. The TBM network (Transports Bordeaux Métropole) includes 4 tram lines and 78 bus lines on which more than 400 vehicles travel, covering almost 30 million kilometres a year.

In addition to the bus fleet VDL Bus & Coach will also provide the complete charging infrastructure and is also responsible for the complete fleet management system. Start of operation of the new generation of Citeas is planned for the first quarter of 2024. The e-buses have a battery pack of 552 kWh and are extremely suitable for city transport with high level of service. The range of the new generation of Citeas has been considerably improved: the LF-181 can reach a range of up to 600 kilometres, depending on the chosen configuration.

With its 25-year experience in electric transport, VDL Bus & Coach is a top player in e-mobility in Europe. Since the unveiling of the first SLF-120 Electric Citea in Geneva at the UITP Mobility & City Transport exhibition in 2013, VDL Bus & Coach has stepped up its focus on electric mobility.

In 2021 VDL Bus & Coach unveiled the new generation of electric Citeas representative of the VDL vision: a bus concept based on that of an electric drive train, future-focused and completely zero-emission. VDL Bus & Coach have introduced features such as an innovative composite side wall construction that is 15% lighter than a conventional side wall and a floor-level integrated battery pack as standard.

By 2021, VDL Bus & Coach had established its name as a leading transition partner on the road to zero-emission public transport. With more than 900 buses delivered throughout 11 countries between 2015 and 2021, VDL Bus & Coach boasts a 20% market share in Europe. The milestone of 100 million kilometres travelled by its electric vehicles, reached in February of this year, represents a saving of more than 14.7 million kilograms of CO2 emissions.

Solaris with Innovation Award in the category “Electric bus: Intercity“ On 26 April, at a festive…