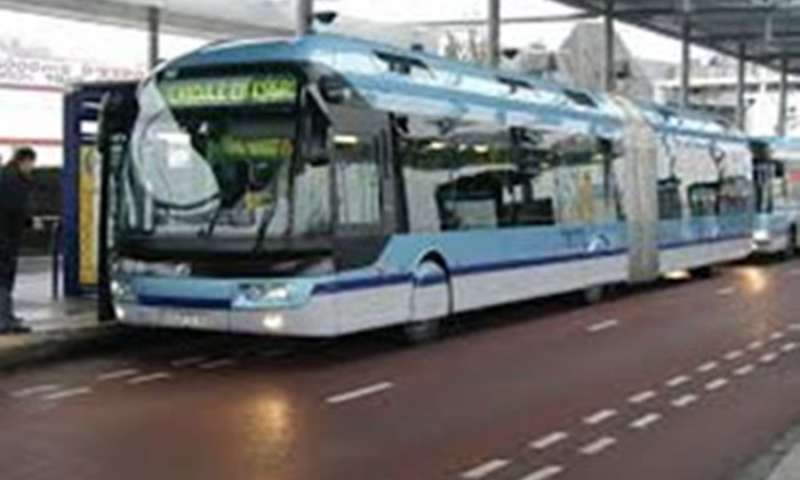 EuroTransport has recently showcased1 several Bus Rapid Transit (BRT) systems in the UK along with the success of Keolis in introducing BRT in their areas of operation. The bigger question is; does BRT also work for the rest of Europe? To find out, Public Transport Industry Expert Graham Ellis has been looking at the BRT picture across Europe.

Bus Rapid Transit
Barcelona designated bus lanes – two separate lanes allowing for overtaking.
The latest figures show that there are 14 countries in the European Union with BRT schemes in operation and these operate within 56 cities and carry a total of 1.96 million passengers per day. The figures do not give details of every system but, generally they show that; excluding the UK, there are 21 in France, three in Spain, five in the Netherlands, three in Sweden, three in Germany, two in Italy and eight in other countries, however there are some cases where there are several systems in the same city which can distort the figures slightly.

BRT has to be viewed as a part of the wider overall public transport offering in Europe, that is not to say that it is not popular, just that it has to fit into a wider transport matrix. Looking at most European countries there is a large reliance on heavy rail to move large numbers of people into and out of cities, at a secondary level light-rail or tram systems then move those people to/from the stations into the working environment. Residents of the cities then either use the tram systems for their inner urban travel or use buses from the outer urban areas into the cities. The BRT systems then have to fit within this system framework and they are seen as a viable alternative to the high infrastructure costs that accompany light-rail/tram systems.

Looking at several systems across Europe it is easy to see the different approaches taken to meet each country’s specific needs.

In Castellon, in the province of Valencia on Spain’s eastern coast, they have chosen to use fully segregated roadways, with accessible stations and utilising hybrid trolleybuses rather than full diesel power. The system is only 2km-long with five stops but carries 3,200 passengers per day. The system has been in operation since 2009.

Bus Rapid Transit
Castellon segregated busway
In the neighbouring region of Catalunya, the city of Barcelona has one BRT line in operation – Line 64. This has a route length of 21.8km with 17.44km being on segregated roadways, it has been in operation since 2007 and carries 15,300 passengers per day. Currently Barcelona and its transport operator TMB are re-organising the bus lines but Line 64 appears to be unaltered. The route runs from Barcoloneta in the port area, across the city to Pedralbes in the west.

Bus Rapid Transit
Catalan BRT inter-city bus
The routes are operated by high spec buses that are fully accessible and are Wi-Fi enabled, as well as supplying free newspapers. There are high-frequency operations and high speeds as the buses are able to use dedicated bus lanes and traffic priority measures. Real-time information is provided at both the bus stops as well as on-board.

Looking outside of Spain, there are a large number of systems in France with several cities having multiple BRT lines. One city where BRT is installed is Nantes – the system was installed in 2006 and covers 7km end-to-end, carrying 30,000 passengers per day.

Bus Rapid Transit
Nantes Busway
Another well-developed French system is in Rouen where there are three BRT lines that have been in existence since 2001/2. Unusually this system uses the Irisbus Civis units which are optically guided through the city – the main part of the vehicle is driven via electric hub motors that are powered from a small diesel engine which gives a flat floor throughout the interior.

The optical guidance system consists of a dashboard camera coupled to some very sophisticated software that allows the bus to ‘see’ up to about 100 foot ahead (30 metres). The system still works even if only one-third of the road stripes are visible. The system auto corrects the path of the vehicle and allows it to ‘dock’ within two inches of the curb; it also allows the buses to operate in narrower lanes than usual so allowing them to operate in places such as central median strips and redundant railway tunnels.

Bus Rapid Transit
Rouen Iris Civis, showing the double dotted optical steering lines on roadway
There is an on-board GPS system that provides real-time bus location information to the bus stops on the route showing time to next bus and destination. They are also fitted a system that allows the driver to change the traffic lights ahead to prevent the need to slow down and so maintain a consistent headway. Whilst the optical steering sounds great it can be fooled by such things as snow and ice but if the system fails the driver has full over-ride control. Individually the three lines cover a distance of 43.5m but, as some of the routes have common stretches the total length of the system is 31km and the system carries 42,000 passengers per day.

Whilst not an exhaustive view of the whole of Europe, this snapshot shows that BRT has had support since the early part of this century and with the high costs of LRT and heavy rail infrastructure, it is likely to become more popular over time. 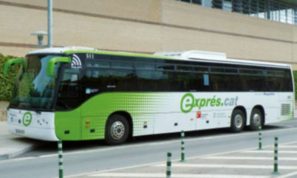 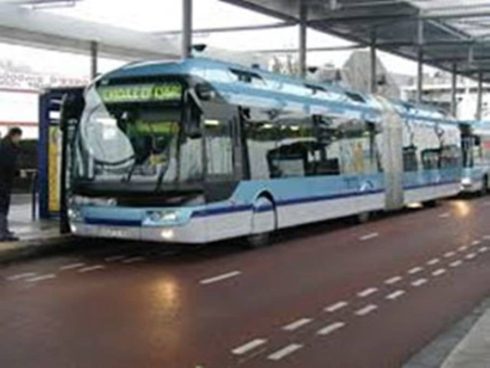